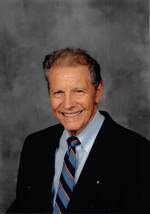 Clarence Charles Franklin Jr, 95, of Independence MO died peacefully at his home Friday night, March 26, 2021. At his side was his devoted wife of nearly 70 years, Elaine Brazeal Franklin and his four children: Charles Franklin III, John Franklin, Laura Monsees, and Sara Harper. Daughter-in-law Donna Franklin and son-in-law Dennis Harper were also at his side in the last moments. The heart that provided so much to so many people would finally pump no more.

Charlie was born July 22, 1925 in Independence MO. He attended Independence schools, worked at various stores on the Square, and graduated from William Chrisman High School in 1943. Charlie immediately began service in the Army during World War II. He served until May 1946 in the Aleutian Islands in Alaska.

After being discharged from the Army, he attended the University of Missouri-Columbia (MU) on the GI Bill. He graduated with a degree of Bachelor of Science in Business Administration. While there, he played basketball and baseball for MU and was active in the Alpha Tau Omega fraternity. He met Elaine Brazeal and they were married on April 22, 1951. This April would have marked 70 years of a wonderful marriage filled with fun adventures.

Charlie and Elaine came to Independence after college and started a family and a business. Charlie first worked for Sinclair Oil Company. He formed Liner Oil Company and then his 50-year business of Franklin Oil Company. Franklin Oil operated numerous gas stations and was an automotive supply distributor throughout the Midwest.

Charlie took a special interest in sports. He played football, basketball and baseball as a youth and is a member of the William Chrisman Hall of Fame. He coached all of his children throughout the years and eventually coached a 17-18 year old baseball team which placed third in the nation in Farmington, New Mexico in 1977. He was often affectionately called by his nickname “King Kong”. Charlie also encouraged his sons to participate in Boy Scouts; he was very proud that his two sons and eight grandsons are Eagle Scouts and Warriors in the Tribe of Mic-O-Say.

Charlie spent his life helping all those he could and was loved by many. He had an engaging sense of humor, a selfless spirit, and was always looking for ways to encourage others. “Kong” will be dearly missed by his loved ones and all those whose lives he touched.

All rights reserved. This obituary is also archived at obittree.com