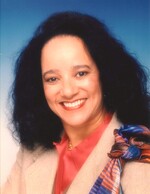 Beverly Anne Logan-Morrison was born October 1, 1941 in Mound City, Illinois but spent most of her youth and adult life in St. Louis, Missouri. She was the second oldest of three girls born to the late George Edward and Georgia Lee Logan. Beverly departed this life on Wednesday, February 17, 2021 at the Village Care Center at John Knox in Lee’s Summit, Missouri after a lengthy illness.

A graduate of Rosati-Kain High School in 1959, she subsequently received her undergraduate degree from Webster University and attended nursing school at Jewish Hospital in St. Louis, Missouri. She began her medical career as a nurse anesthetist but continued to break glass ceilings by earning her medical degree from Washington University School of Medicine. She specialized in internal medicine and enjoyed an illustrious and lengthy career in private practice where she enjoyed taking care of her patients and was known in St. Louis for her dynamic “bedside” manner.

Beverly was united in Holy Matrimony to Dr. Aubrey R. Morrison in 1972 (divorced) in St. Louis, Missouri where they raised three children.
Prior to her retirement, she was an active member of a host of organizations including the St. Louis Chapter of the Links, Inc., Circle-Lets, Inc., former member of Jack and Jill, Inc., and a volunteer with the American Lung Association.

Beverly was known for her zest of life, spirited personality, vibrant smile, beautiful clothes, and of course the love of a good party! She was gifted with intelligence, beauty, determination, and always ready for a dynamic debate (especially on politics). She always “showed up” for her family, friends, and her patients…fondly remembered for her resourcefulness in helping individuals obtain whatever they needed…if she could not do it, then she would find someone who could.
Beverly leaves to cherish her memory, three children, Tamarah Coulston (Jesse) of Las Vegas, NV, Simone Hollins (Eric) of Lee’s Summit, MO and Aubrey Morrison, II of St. Louis, MO; two sisters, Sandra McClung and Deborah Johnson (Rodney) of St. Louis, MO; five grandchildren, Alexis Johnson, Iman Hollins, Leah Hollins, Xavier Morrison, and Isaac Hollins, nieces, nephews, and a host of other relatives and friends.

A private memorial service will be held at Speaks Suburban Chapel on March 6, 2021 at 10:00 a.m. COVID-19 restrictions will be followed with a limit of 50 persons at any one time during the memorial service.

All rights reserved. This obituary is also archived at obittree.com